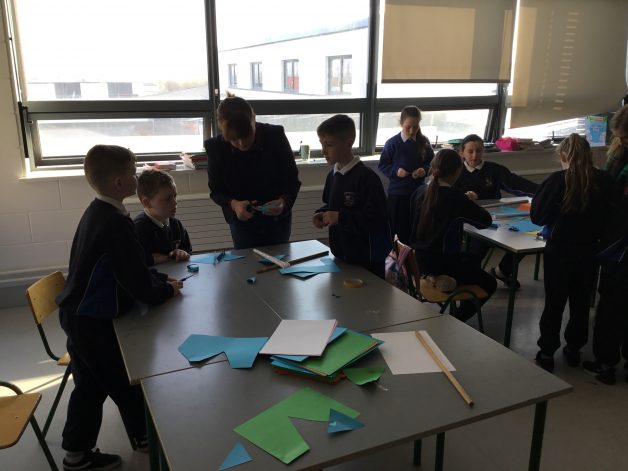 Children from 3rd to 6th class had great fun working as engineers with Wonderstruck during Engineers Week 2020.

The first workshop involved an introduction to Rocket Science. The children worked in pairs to design and build their own rockets. They were encouraged to use their scientific knowledge to design and make their own fins and nose cones to allow their rockets travel as far as possible.

There was great excitement in the big yard when the children gathered together to launch all the rockets.

The second workshop involved the children working in teams to design and build their own fan-powered car. As with the rockets, the fan-powered cars make use of Newton’s Third Law of Motion. Each team was provided with a selection of wheels, propellers and battery packs. These were used in order to try to identify factors which would improve the speed and performance of their car. Once the cars were built the children tested them and made any necessary modifications.

The session ended in the school hall where the whole school gathered to watch the Le Chéile NS Grand Prix.  Huge thanks to Mrs. Cassidy and Ms. O’Sullivan for organising such a fantastic event. We can’t wait until next year!!! Have a look in our gallery at all the great pictures and videos of the event. Click on the letters IMG for the videos.