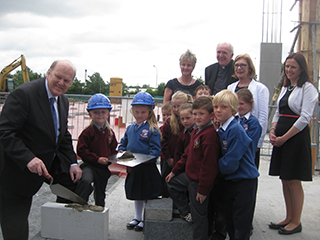 UP to 200 children will have a state-of-the-art school to move into in September 2015 as Galvone NS and Southill Junior School amalgamate.

And as he laid the cornerstone for the new facility in Roxboro on Monday, Minister Michael Noonan promised Le Cheile NS would be “an entirely new concept”.

It is building on all the good things that schools have done in the past but extending it into the full working day so that it becomes a real centrepoint for this community,” said Minister Noonan.

Le Cheile NS is to be a 12-classroom school in its own right but also part of a campus that will be the site of a full service extended school, the first of its type in the country and a model looked favourably upon by the Minister for Education Ruairi Quinn.

The Diocese of Limerick is leading the project, which is also supported by state agencies such as the HSE, Tusla, the Department of Education and Limerick Regeneration. The Bishop of Limerick will be patron of the school.

The amalgamation of primary schools in the Southill area is an ambition of the regeneration programme and was pencilled in at a total cost of almost €12 million.

The work currently underway – which should see the new primary school open in September 2015 – is costing €5 million through the Department of Education’s capital budget.

But this is just the first phase of an overall project that will see the full service extended school model take shape. Phases two and three will involve the renovation of the current Galvone NS building to accommodate pupils at Gaelscoil Sheoirse Clancy and the development of a Child, Family and Community Centre on the site for the delivery of services to children and families.

This is true regeneration insofar as it is not just a building but a bringing together of a range of different supports – preschool, adult education, health and so on,” commented Minister Jan  O’Sullivan.

“That is one of the things we are trying to achieve with regeneration, bringing different government departments and agencies together for something that will be in place for families – from very small children up to parents who have reason to be on the campus.”

Bishop of Limerick Brendan Leahy expressed hope that “Le Cheile National School will be a real beacon of light going forward for us and I think in time it will be something replicated elsewhere in the country.

“As its name suggests, it is a coming together of the children, parents teachers and many others representing the various services in the community to make sure that each and every child who attends here has the best possible opportunity to reach their potential,” said Bishop Leahy.